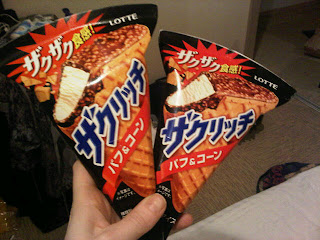 Last night we decided to make some pasta to switch up a little for the palette. Just a brief departure from the Japanese cuisine. Not too shabby when paired with a 5 dollar pear/apple type fruit for desert. 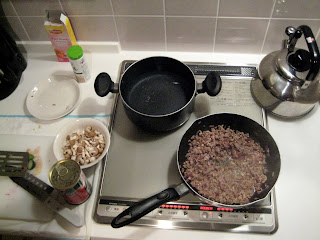 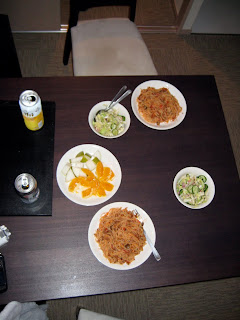 I could not sleep because the Japan-Denmark game was airing at 3:30 am and since I am a guest here, I had to see the game. It may have re started my jet lag but it was worth it to watch Japan destroy Denmark. Sorry to my pals out there! 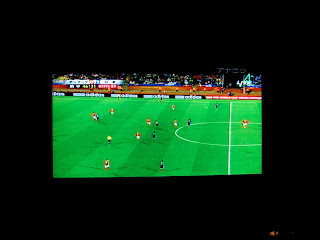 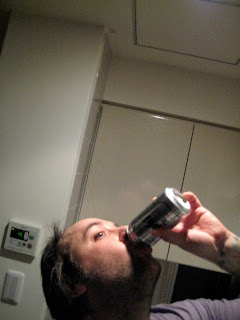 Plus I got to see a fantastic sunrise. 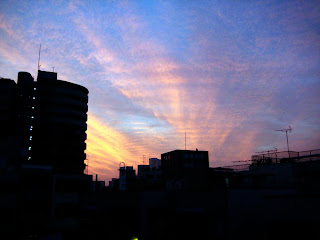 After a whopping 4 hours of sleep, it was time to get up and have a slow start to the day. After a brief meeting with one of the gallery's new artists, we ventured through Shinjuku to locate some fabrics for the shoots. 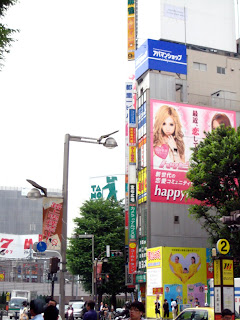 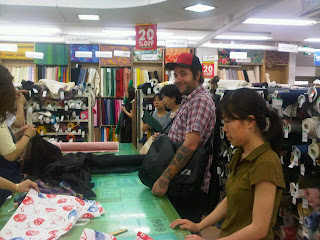 We then headed back to Harajuku to pick up some more kimonos for the shoots, grab some soup and dumplings and walk through the beautiful park with its Meiji-jingu(shrine).

We made a few prayers there and enjoyed the lovely weather and sights. 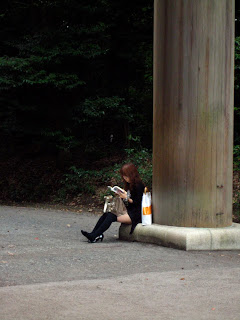 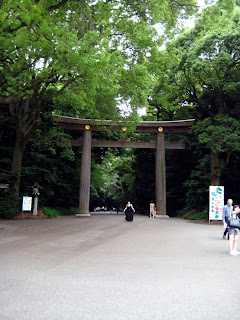 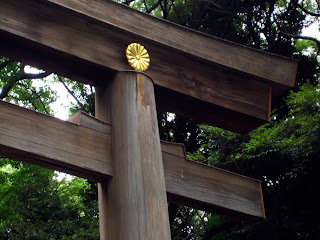 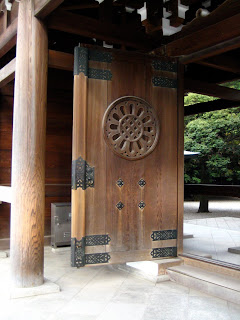 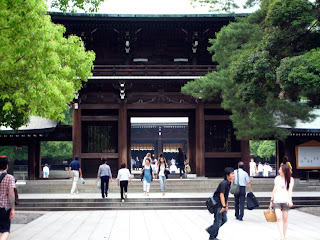 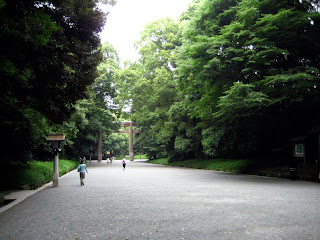 We made our way home soon since I was oh so tired due to the lack of sleep. 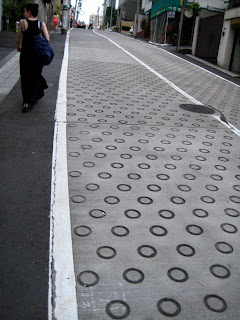 We went to the grocery for the night dinner, soba noodles, some thin slices of beef, spring onion with ginger, tempura and baby sized beer for the lady and reg for myself. 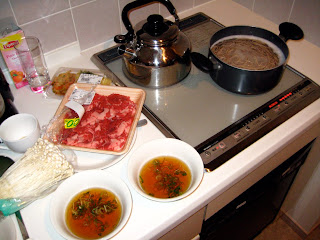 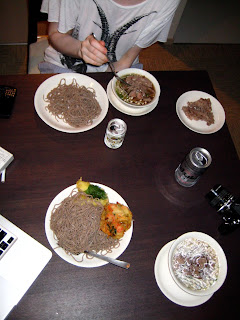 We made some plans for Kyoto and decided to have an early night in and watch the Brazil game. Meeting with Kieko for lunch tomorrow to plan out her shoot. Im tired. Bye bye.-xoxoxDavid 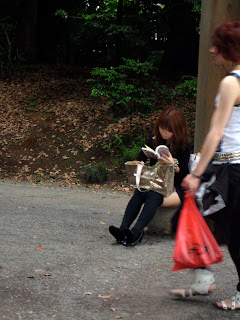 
What a long day - but no wonder. We were exhausted after having to stay up until 1.30am to even begin to watch the football games and whilst I passed out shortly after David was screaming and dancing and growling with all the Japanese fans out there. I had given all I had for Italy to beat the Slovenians _ my least favorite _ but alas we all know what happened.
After starting my day with a "Papple" - a $5 cross between a pear and an apple we ventured out to go meet with one of my artists Marmite Sue in Shinjuku. 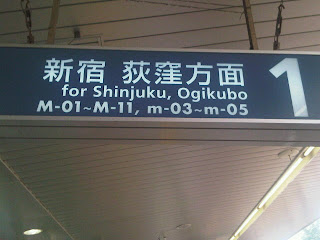 I would consider Shinjuku like the fashion/fabric district in NYC. As David and I were looking for more white and black fabric for the shoot Marmite Sue was so sweet to guide us to the biggest fabric store in the neighborhood and I almost died. 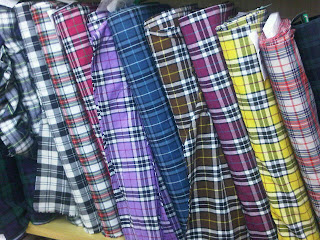 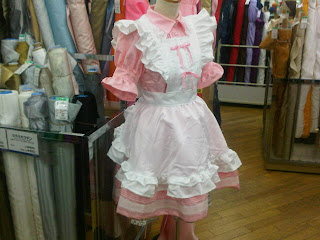 I mean there was everything - stars. stripes, plaids, dots, Alice in wonderland and than some !!

And that was juts the first floor second floor was fully dedicated to eyelashes and top hats in all shapes and sizes third floor everything you need when it comes to feathers and than the fourth floor a button paradise and so much fun !!! We found what we needed and literally forced ourselves to leave the premise.

Than with dried black squid noodles - japan's replacement for pretzel sticks we went to the beautiful Meiji Jingu Shinto Shrine. 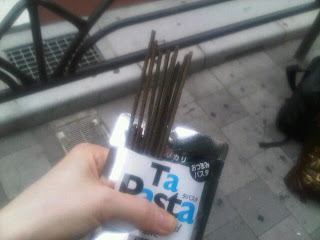 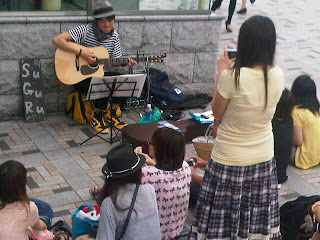 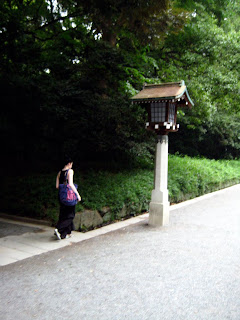 The thing I love most about Shinto is that it has not founder no holy book not even the concept of religious conversion. Instead it values harmony with nature and virtues for example such as " Magokoro" - the sincere heart. David made me a beautiful present and bought me a wooden prayer plate on which we each wrote our wishes and placed them amongst the thousands of prayers or wishes that are put here everyday. 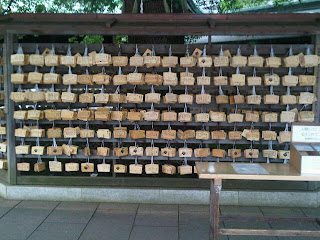 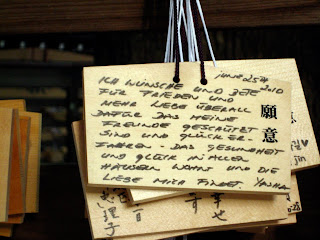 A monk showed me how to pay respect which starts with washing your hands and rinse your mouth before you bow and clap your hands in front of the main shrine.

After that we went home and on the way I found a beautiful raven feather. 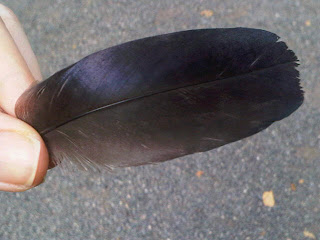 Ravens are amazingly large here and their feathers beautiful blue black. It felt nice to find such a beautiful thing right after I had just send wishes to the sky at the shrine. Home bound we were and just before I went up to the apartment door I met some more doggy friends ;-)-Yasha 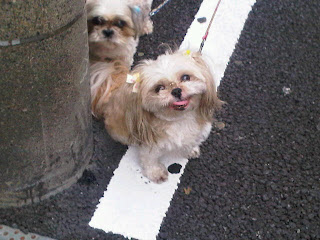 PS : after successfully passing tea ceremony David has been upgraded to red which means " TAKE ME NOW!!" hahahahaha 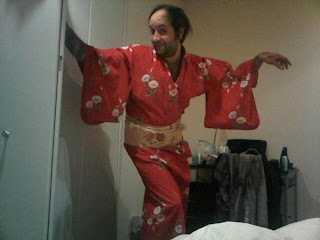 Posted by David Hochbaum at 8:07 AM

David Hochbaum
updates on my new works, exhibitions and the delights that I happen upon in this world